Taking a cooking class in Bangkok came highly recommended. And, since I already feel like I’m gorging my way through Asia, I thought a cooking class would be very fitting for when I return to New York  and feel like eating Asian food again (8-12 months).

With a little research, I came across, cookingwithpoo.com. I was sold. At 8:30am the following morning, after housing an omelet over rice that I bought on the street (a local insisted that I put ketchup on it), I waited under an awning of a hotel in central Bangkok. Also waiting there was an Australian woman and her 2 year old son with a head of spastic blond curls. Due to the flooding in Bangkok, it turned out that although 12 people had registered and paid for the class, it was only us three. We hopped in a van with Poo (our lead chef who had adopted her very fitting nickname). The first stop was the market; there Poo made sure to pick up and show us every possible thing that people in either northern or southern Thailand could conceive to eat (buffalo skin, chicken feet, an assortment of insects, etc.). It was pretty awesome/disgusting. 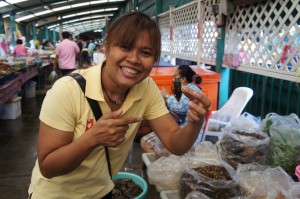 After the market, we drove to Poo’s home/kitchen where we cooked four amazing dishes (Tom Yum Gai, Pad Thai, Larb Pet and Mango sticky rice).  One course in, I regretted my omelet. Two courses in, I thought I may not need to eat for another day or so. When we reached the third and fourth course, I had to place all my focus into politely finishing each dish while silently cursing myself and vowing never to eat again. But despite the sensation of feeling like I was going to burst, I will admit, as the apron says, “I cooked with Poo and I liked it.” 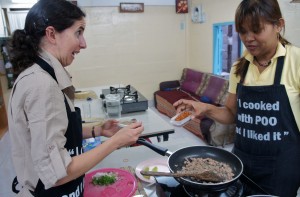